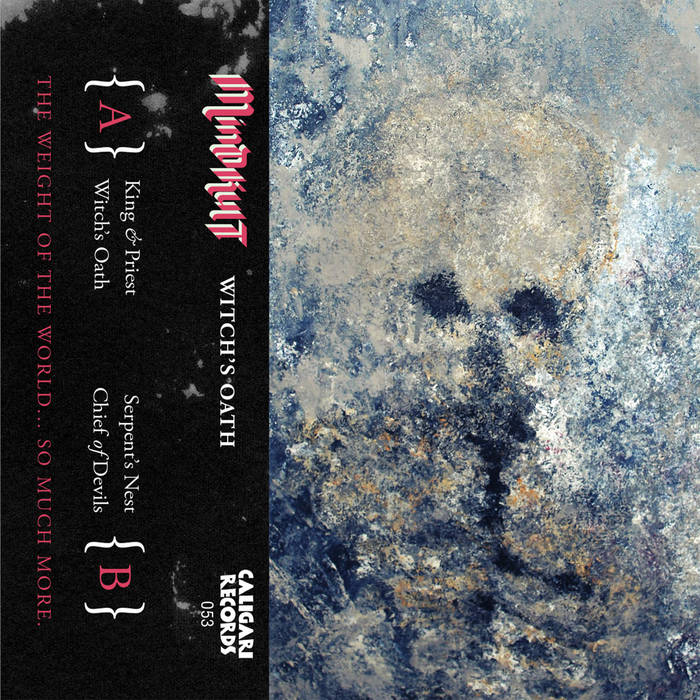 Out Now On Tape & CD

Four songs in the subliminal key of Lucifer. Drink deeply this potion. Follow incandesce and levitate. The tendrils of your existence spiral away into indecipherable tenebrosity. There is only the buzz inside your skull now. There is only the riff. The power of the chord. What at first appears as catchy, fuzzed-out doomgaze reveals itself over a series of repeated listens to be truly sinister and subversive: the alluring voice of a suicide cult leader. A man who sings the people’s blues, but for damnation’s sake. Call it Witch’s Oath, Mindkult's first opus.

All songs written and produced by MINDKULT, the sole creation of Fowst. Recorded at Monticello Studios in 2016. Art/Design by Elias Kontogiannis (www.surrealsoreal.com).

No Clean Singing: But whoever is behind “Witch’s Oath” includes a guitarist whose soloing is both soulful and trippy and a drummer who’s not flashy but knows how to get heads moving. The coating of fuzzy distortion on the guitars and bass is also a welcome touch. Get ready to rock the fuck out.

The Obelisk: …“Whatever Fowst‘s real name, whoever produced the album, whatever bands he or they’ve worked with before, it’s the songwriting coming through most of all on Witch’s Oath and the sense of stylistic accomplishment that songwriting showcases. It’s early in Mindkult‘s tenure to make a guess as to directions the band might go, but this initial EP makes a compelling argument in favor of finding out.”

Nine Circles: Truly, enough good words cannot be said about Mindkult’s maiden EP Witch’s Oath. From doom to stoner, and even a touch of alternative, Fowst, by himself is compelling. But as a complete package Mindkult hits all the right notes and provides us with a glimpse into what will hopefully be a sooner rather than later full length. For now, this EP is a satisfying and very addictive first chance to experience this band on the ground floor.

Metal Addicts: This is just simply one of those records that you hear and it’s hard to resist listening to unless you’re just that fucking stubborn, and upon listening you can’t help but realize how much potential Mindkult displays with “Witch’s Oath” alone and how much you want to hear a follow up.

Headbanger Reviews: If I were to recommend you a fresh new and fabulously dark doom album that is sure to grasp your entire being into an excellent experience, I’d have no choice but to at least mention “Witch’s Oath”. Mindkult has proven with a mere four tracks alone that he knows exactly what he’s fucking doing and that his special brand of doom metal is nothing to scoff at.

Stoner King: Brilliant, slightly unnerving with a strange mix of the raw and smooth Mindkult's "Witch's Oath" worms its way into the psyche and takes up residence there making sure your life and world will never be the same again.

The Ripple Effect: Mindkult are bound to adhere to fans of classic doom and melodic stoner metal with its building riffs, clean vocals, and overall sonic landscape of head banging distortion.