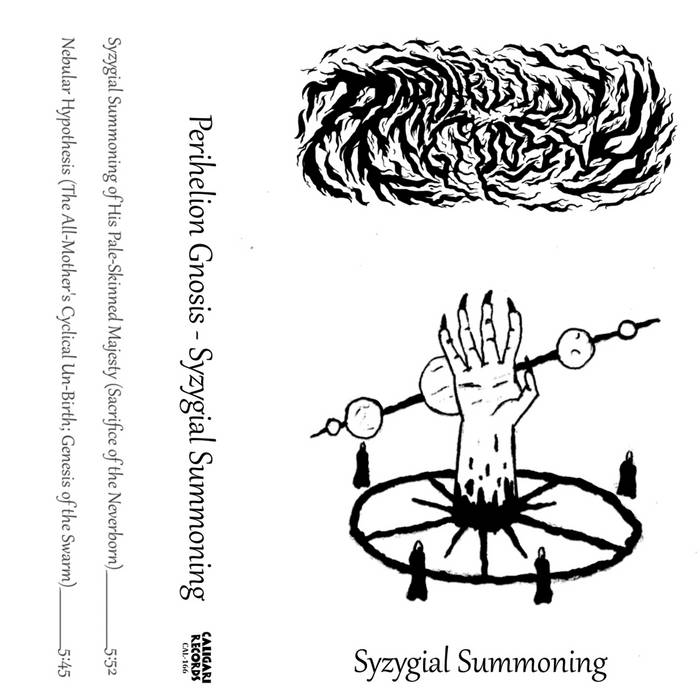 JT EXTREME This 2021 death metal EP does more flips, tricks, and nadpumps in its 12mins than most do in 40, a true insta-buy

barleybase Serious earworm material that will take up roots and not let go. Favorite track: Syzygial Summoning of His Pale-Skinned Majesty (Sacrifice of the Neverborn).

Perihelion Gnosis is the work of Canadian musician Caleb Simard. Although one could say the band is entirely Simard's vision since he writes all the music and plays every instrument, uniquely, he has help from a close friend to flesh out the totality of Perihelion Gnosis: lyrics, concepts, themes, and even artwork and logo were done by said friend, who Simard considers "in the band" even if he doesn't play or write any actual music.

As for the music itself, Perihelion Gnosis exists on the fringes of the weirdest, wildest death metal. Going from sludge to skronk, backwards riffing to black-hole propulsion, zero-BPM doom to atonal death, Syzygial Summoning sounds very much like its namesake, all wrapped in richly shuddering tones exceptionally advanced for a first recording. Imagine a malformed spawn of Disembowelment and Cianide, informed by demo-era Demilich, and you're getting nearer to Perihelion Gnosis...but not quite exactly there.

As could be expected from such a description, Perihelion Gnosis' lyrics - again, written by mainman Simard's close friend - go great lengths to match content with form. By and large, the lyrics are inspired by cosmic horror, the fear of the unknown and unknowable, the infinite vastness of space and how very insignificant the human existence is seen at a larger scale. All lyrics are set in the same universe that's constantly being built upon in new songs, with returning characters and storylines. A concept EP is planned that will feature concepts and characters introduced on Syzygial Summoning and upcoming releases.

Want to know what a "Syzygial Summoning of His Pale-Skinned Majesty (Sacrifice of the Neverborn)" or "Nebular Hypothesis (The All-Mother's Cyclical Un-Birth; Genesis of the Swarm)"? Then dive in (and try to survive) Perihelion Gnosis' debut demo!