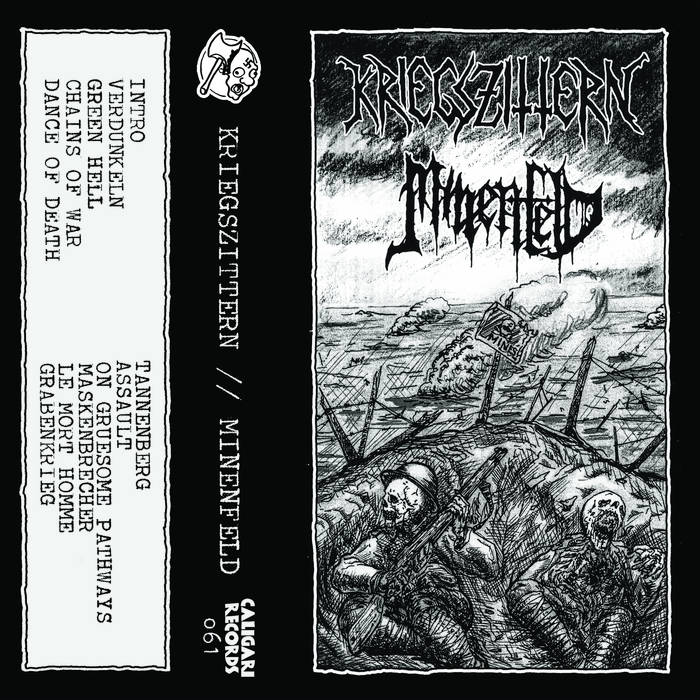 No Clean Singing: Kriegszittern’s side of this new split includes a dismal, doom-cloaked intro track that conjures the stench of a crypt and four songs. Those four songs strengthen the atmosphere of ghoulish battlefield horror that began with the intro, while simultaneously kicking adrenaline levels upward quite effectively.

The vocals are a monstrosity of sound, a deep malignant roar that sounds devoid of any semblance of human warmth or mercy and becomes maniacally ravenous when it pitches up into hair-raising shrieks. The dirty guitar and bass tone is in keeping with the vocals’ grotesque textures, while the occasional bursts of frenzied soloing are themselves a shrieking horror.

As was true of the debut demo, however, these songs will get your head moving, and they’re dynamic in their pacing, alternately propelled and restrained by a bludgeoning rhythm section. The music romps, it rampages, it crawls like a fat white slug in a mausoleum leaving a trail of slime in its wake. It’s a thoroughly evil joy to hear this band at work.

And by the way, “Kriegszittern” seems to be an old term for “shell shock” (Google Translate will tell you it means something like “tremors of war”), and the end of Kriegszittern’s side contains a pointed reminder of the band’s inspirations, with the sounds of mechanized battle layered over morbid organ tones and horrific spoken words.

As you might be able to guess, “Minenfeld” is the German word for “minefield”, and Minenfeld’s side of this split — which includes six tracks — begins with a sample that recalls World War I (and more such samples lie ahead).

Minenfeld’s music has a harsh, rough edge in its sound, with the abrasive sandpaper touch of distortion coating everything — all the better to make the violence of their songs even more corrosive to the ears. The music’s sound also has a powerful sense of immediacy — as if the listener is right there in front of the stage while these marauders apply themselves to their craft.

And Minenfeld’s craft is the kind of death metal that rumbles and rolls like a tank attack and strafes like a fighter squadron diving from the skies — and it’s just as electrifying as I would imagine it feels like to be dead center in an active war zone. Like Kriegszittern, Minenfeld change up the rhythms and pacing in a way that allows them to maintain a vice grip on the listener’s attention.

The songs, for example, include some powerfully addictive chugging riffs as well as murderous gallops, pneumatic pile-driving, and those tank-like, rumbling crushfests. I’m also a big fan of the vocals, which are raw, gritty, and boiling with fury and pain.

For me, Minenfeld is a great new discovery, and I hope you’ll feel the same way after you hear their side.