by BRETWALDAS OF HEATHEN DOOM 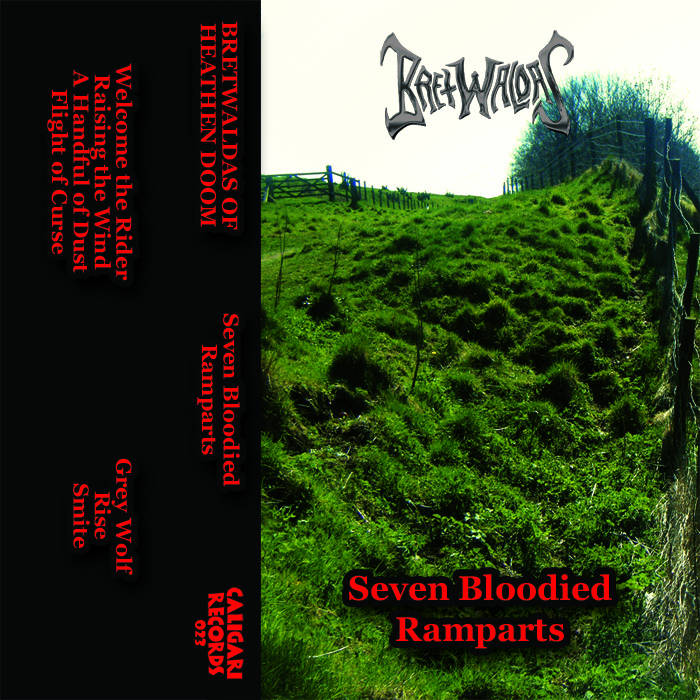 It is an honor for CALIGARI RECORDS to release for the first time on tape one of our favorite recordings, the third effort by BRETWALDAS OF HEATHEN DOOM, Seven Bloodied Ramparts.

Originally released by King Penda in 2010, Seven Bloodied Ramparts is the culmination of the work of Wartooth and Acwealde, who after two semi obscure but praised full-lengths were finally able to coalesce all the right influences in what is a powerful and raw concoction of crust, doom and black metal.

This is the 23rd release of CALIGARI Records.

Julian Cope on Seven Bloodied Ramparts, 'this new record is a righteously brief collection of just seven compelling pieces, but all so brutally intense, so lyrically enigmatic, so vocally commanding that you just gotta give in to its Dark Age intensity. Submit or switch off. Bretwaldas’ lyricist Wartooth brusquely declaims his Odinist messages like a Danelaw Lemmy squarking printed orders to his feisty charges; yet the magisterial chords & heroic moods within each song conjure up genuine ancestral sorrow and Sense of Loss, all raised up in that appropriately Cumbersome & Flailing J. Division/B. Sabbath manner. Stoned at a Jutland motorway services once during Danish research for THE MEGALITHIC EUROPEAN, I overheard locals apparently speaking in Brummie accents, until I sussed that our Midland accent is just that of the transplanted and industrialized Dane, those who still prefer the Danish ‘ta’ to the English ‘thanks’. Even today, all Brummies call the street the ‘straight’ because it began as their ancestors’ way of describing Roman roads. Listen to this Bretwardas album and you might find yourselves similarly slipping between the world of Now and the world of Then. Accept their Mercian metaphor or die, Motherfuckers! Uncanny but true.'