Of Throes and Blight 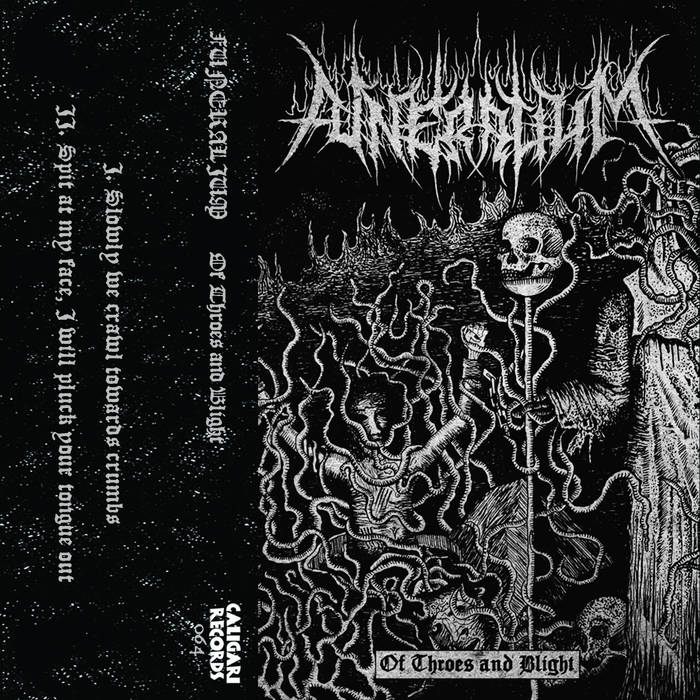 Few possess the discipline, let alone the grit to author twenty-plus minute dirges of blackened doom cruelty, but Paris’ Funeralium do so once again with dread aplomb. On Of Throes and Blight, their third album, and second double-album to date, Funeralium throw four songs of death, doom, and pestilence on the rack, torturously stretching them to upwards of thirty-some minute long affairs. More than just an epic nightmare, Of Throes and Blight is an inescapably enthralling experience not unlike tunneling slowly to your own watery, verminous tomb. Suffer the suffocating crush of four new opuses of absolute blessure de l’âme. In the hemorrhaging vein of looming eidolons such as Worship, Thergothon, Funeral Moth, and Loss, recommended if you hate life.

Dark View: These crawl along on all fours at an excruciatingly slow pace, its hands and knees torn to shreds by razor sharp shrieks that would do Bethlehem proud. Each track is a trying, agonizing experience as you drag yourself through riffs stretched out so far its tendons are about to snap, with only pounding drums and unearthly growls to whip you along. Not for vanilla lovers.

Invisible Oranges: Across their collection of lengthy (this is their second double-album) releases, Funeralium’s ultra sick doom, a title taken from their 2004 demo, is the sound of pure, sluggish desperation. Much like running a marathon, taking in Of Throes and Blight is an exhausting affair, but the four-track, near-ninety-four minute album acts as a sort of “quintessence” for funeral doom. Much like Evoken and Thergothon who preceded them, Funeralium’s music is extremely slow, but punctuated with these beautiful moments of heart-breaking clarity.

Lords of Metal: when Funeralium releases an album you can bet your ass it will be ultra-sick doom clocking in at about ninety minutes. ‘Of Throes And Blight’ drags, tortures, destroys, crumbles the listener 93 long minutes going right through the body. Spread across four songs (two songs per cd) of which the shortest is nine minutes and the longest 32. Quite the struggle for most normal people in this age of wanting to consume as much as possible in as short as possible a timespan. If you take the time to undergo the entire trip, you will exit it a reborn person.