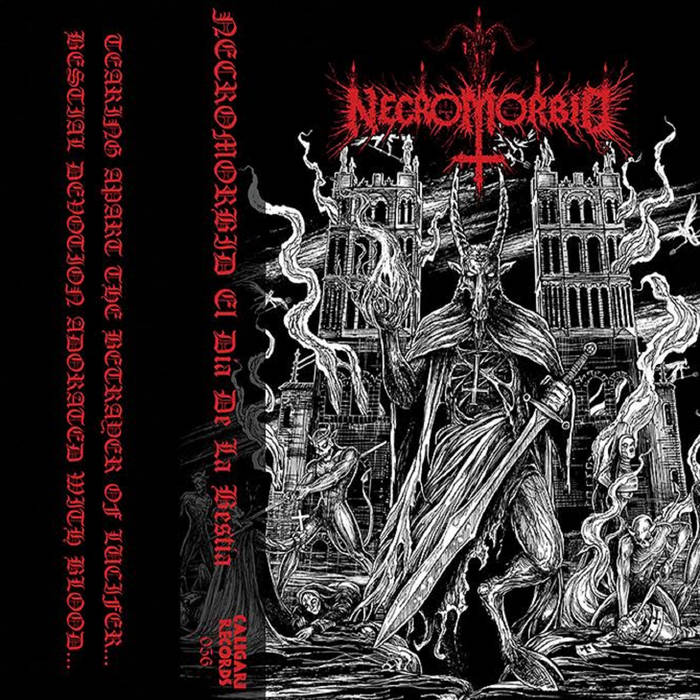 Necromorbid hail from Italy and like glorious acts such as Mortuary Drape, Bulldozer and Necromass play a bestial blend of death and black metal. In the vein of Archgoat, Black Witchery, Morbosidad and the likes. The band consists of Dysangelium (vox/guitar), Bestial Desecrator (drums) and Arch Commander Equinox (bass). "El Dia De La Bestia" is their debut full-length album, 10 tracks of unholy desecration and perverse abomination against Christ and Christianity.

No Clean Singing: Draped in chains and with grim and murderous countenances, Necromorbid have mounted their warfare against Christ and Christianity from Italy’s ancient and beautiful land. Embracing the lineages of Archgoat, Black Witchery, Morbosidad, and other allied goat-horned purveyors of satanic black/death ferocity, Necromorbid have recorded a debut album fittingly named El Dia De La Bestia.

The music has been given a relatively crisp production, in contrast to the murkiness of much vicious black/death metal, but there’s still a filthy layer of distortion on the guitars that suits the music’s grim, dismal melodies, which course through the songs like tainted blood in a demon’s surging veins.

While ferocious speed dominates throughout, the songs do benefit from variations in the pace and in the rhythms. The band segment the ravenous slaughtering, sometimes with evil, lurching stomps and more often by following the drummer into synchronized pneumatic hammering that departs from his usual blasting, There’s some punk-fueled romping scattered here and there as well — in addition to manic crescendos of berserk cacophony.

The vocals are a tandem of high, bloodthirsty shrieks and deeper, hoarse roars and howls that together seem to borrow from hardcore, black, and death metal in a way that adds fuel to the fiery hatred that animates the album.

Nine Circles: Necromorbid penetrate the thick and crowded throngs of satanically persuaded blackened death metal bands and come away with an extreme statement of supremacy. They expand greatly on their influences and leave this bestial branch of metal in a better place than they found it.

From Beyond: the true genius of El Dia is the balance between audible production and cult cred. It’s an infernal racket—built around blastbeats and riffing that alternates between percussive and blinding tremolo—but, for the first time in my life, I’m marveling at the musicianship on a record with a black-and-white, goat-headed warrior wielding a massive sword on the cover.

Featuring Oakland sounds from the Smart Bomb collective and Samplelov.