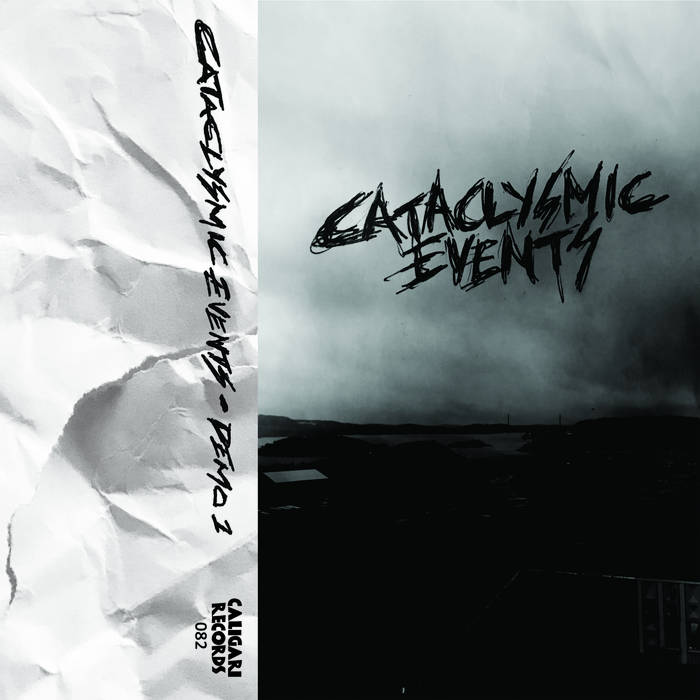 Once upon a midnight dreary, while I pondered, weak and weary,
Over many a quaint and curious volume of forgotten lore—
While I nodded, nearly napping, suddenly there came a tapping,
As of some one gently rapping, rapping at my chamber door.
“’Tis some visitor,” I muttered, “tapping at my chamber door—
Only this and nothing more.” POE - The Raven

Can it really be a coincidence that willfully anonymous Swedish newcomers Cataclysmic Events refer to themselves in terms of their lineup only as The Nameless Fools? Well yes, of course it can — universe of infinite possibilities and all that — but thinking in terms of Swedish countrymen Ghost and their lineup of Nameless Ghouls, the rhyme would seem to be a happenstance choice. The question then becomes whether it’s a relation, a nod to that outfit or pure mockery. I’ll admit that of those three, the latter or some combination of the first and the third seem the most likely, and I say that in no small part because Cataclysmic Events‘ Cataclysmic Events (AKA Demo 1) is so rife with pervasive, down-to-the-bones fuckall that reverence of any kind seems out of character.

Certainly the aesthetic between the two acts is disparate enough, and rather than the pseudo-evil melodic pop heavy of their countrymen, on their Caligari Records-released seven-song/25-minute debut, the Uddevalla-based three-piece — we know there are three of them, even if they don’t have names — pull more influence from rawest Entombed, Samhain and Celtic Frost much more than Blue Öyster Cult, though both “Anti-Masonic Girl” and “So Sick, So Sick of Them All” (about a muscle car, suitably enough) seem to pull a surprising flash of melody from the likes of Queens of the Stone Age and both the marching “Apocalyptic Rebels” and the penultimate “Shake the Doom” show some militaristic punk-metal flourish à la Germany’s Mantar, though even this aggressive underpinning is met head-on by Cataclysmic Events‘ very active lack of shit-giving.

Giving that impression is no less an aesthetic choice, of course, than the trio’s buzzsaw bass and guitar tones, garage-punkish buried drums, or the inclusion of the apparent surf-punk what-the-fuckery that is closer “Fu-Fu-Fu-Fu Blues (AKA Bonus Crap),” or the advertised fact that Cataclysmic Events (AKA Demo 1) was recorded in a matter of hours, all live, over the course of a single evening. “Recorded and mixed in 2-3 hours so don’t expect anything fancy or well-polished,” is how they put it, and fair enough. From the eponymous opener and longest track (immediate points) — which ranges as far as a sprawling 4:32 — harsh tones, grim and gritty rock impulses and a proto-goth The Birthday Party-esque declarative vocal delivery permeate the raw-structured cuts, and while Sweden has a long history of garage rock, Cataclysmic Events effectively turn this on its head in the name of crafting something darker and more punishing from it.

Because they call their self-titled, even parenthetically, a demo, one wonders how the motor-rocking impulses of “So Sick, So Sick of Them All” or the New Wave/proto-industrial boogie charge of centerpiece “Apocalyptic Rebels” — a title which seems tailor-made for a t-shirt if ever there was one, and either to be or not to be confused with Hellhammer‘s “Apocalyptic Raids” — will pan out or gel in terms of the band’s sound overall, or if they will, or if in making an actual EP or full-length album they might take a more developed approach, but too crisp a delivery would detract from the sense of onslaught in this material and The Nameless Fools seem to know it. As regards this being their first release, even that basic realization bodes ridiculously well and speaks to prior experience crafting stylized material.

The only thing missing from Cataclysmic Events (AKA Demo 1), near as I can tell, is a good “blegh!” — though there is a Tom G. Warrior-style “ough!” in “Cataclysmic Events” — but maybe that’s a stone the band are purposefully leaving unturned for next time or it seemed too obvious. Either way, the meld they conjure here between black and roll, death and roll, heavy rock and roll, and assault and roll should find any number of niche-within-niche appeals among genre heads, and while one hesitates to predict the future, particularly for an outfit so clearly given to an outward showing of a distinctive sonic nihilism, there is an undercurrent of songwriting even in “So Sick, So Sick of Them All” that speaks to a notion of control at work somewhere along the line.

As it stands in terms of presentation, however, from the tonal filth proffered in the low end of “Hand Heart Death” to the almost mocking chugger-nod that starts out “Shake the Doom” before it makes its way into its more careening hook, the most prevalent impression made by Cataclysmic Events is one of grinding rawness, and one can only hope that whatever they do next they continue to carry that forward. I’m not sure this band — whatever The Nameless Fools end up calling themselves or whoever turns out to be involved in the project — would ever need more than a full day to track a record, and clearly the several hours they took to conjure this demo/album/collection/whatever-it-is was time well and destructively spent.